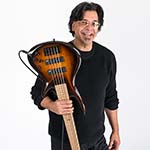 Back in August while playing with Michael and the band in Los Angeles, I had an excellent opportunity to invite this extraordinarily talented and humble gentleman to do an episode of Tales. We conducted the interview backstage after the show. Amidst the noise of the guys packing up and chilling out at the same time, I was able to find out even more information on this fascinating and hardworking musician.

I first met Jimmy back in 1993 when he was still performing with the Yellow Jackets and I had begun touring with the Michael Franks band. As longstanding member and co-founder of the Jackets, Jimmy took an amicable hiatus from the group in 2013 to use the time to pursue other artistic challenges and most importantly, to focus on his family. From my own personal experience, when you are a successful touring musician you can spend 10 months on the road, so it made sense after touring and playing with the Jackets for 30 years, the time had come for Mr. Haslip to take a break. But Jimmy didn’t take “a break” per se, instead he only decided to take his brilliance and imagination and apply it to the new musical avenues that opened before him.

“Without tradition, art is a flock of sheep without a shepherd. Without innovation, it is a corpse.”  —  Winston Churchill

I clearly remember when I first launched Tales from the Jazz Side, June 2013, with Michael Franks being my very first guest, and how grateful I was and still am, to him for sharing his time, life and brilliant mind. Each month I would work on getting guests for the show, recording them, lot of times while I was on the road with the band. Periodically, Michael would ask me how the show was going and if I needed any help. On one of our backstage chats he mentioned Jimmy Haslip as a possible guest and offered to connect me to him. The rest, as they say, is history.

In looking back over the past two and half years of episodes and all of the great stories shared by the guests on those pass shows, it seems that what has been a reoccurring point, centers around the necessity for focused discipline coupled with hard work. If anyone represents that ideal it is certainly Jimmy Haslip. Next to Buddy Williams and the late James Brown, he has to be the hardest working man in show business. Besides his willingness to work smart and diligently, Mr. Haslip is a living and brilliant example of someone, whose love for music, for creating value in life and art, is the guiding force that motivates and inspires him to constantly embrace new challenges. As you listen to this interview you will wonder, where does he find the time? Well he does find time for his craft as well as for his beautiful wife and family.

What an honor and a privilege to close out and open the year with this month’s guest. Jimmy Haslip, a musician steeped in old tradition, while simultaneously breaking ground for new tradition. A true innovator. And that is a very rare thing these days.

Happy Holidays and thank you all of reading and listening!!!!!