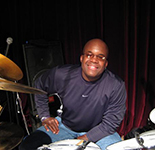 My guest this month is another accomplished player that I have had the honor to work with while out on the Michael Franks tour. One of the first impressions you may get when first meeting Lionel Cordew is his open and easy going manner, his willingness to cooperate and to go beyond what is required in order to do the best job that he can. And man, can he do the best job. In fact not only is it the best job, but it is an exceptional job. And you don’t have to take my word for it. His resume speaks for itself.

So its safe to assume that Lionel’s musical influences were not only interior experiences, growing up in a gifted musical family with his brothers as inspiration, motivation sprinkled with a little competitive spirit, but also exterior ones, his neighborhood/community surrounded by prodigious musicians that provided him with a daily diet of musical sustenance. This symphonic immersion from inside and outside is conspicuous when you hear him play because not only did he cut his teeth on drums, but he also learned how to play all types of percussive instruments, as well as guitar and bass.

This interview is a little different than the ones I’ve recorded in the past in that I venture into the technical, the mechanics of the instrument, such as drum configurations. I also realize that you can spend years around someone and always discover something amazing and new about them. What better way to come out of a hiatus than to interview Lionel Cordew, a true professional, talented, perceptive musician who has spent his life constantly learning, growing, not only as a drummer but as consummate musician.

You can connect and find out more about Lionel Cordew