Tales from the Jazz Side with Jay Azzolina episode #16 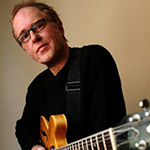 Tales is coming to you with guest artist guitarist/composer/teacher Jay Azzolina.

One of the things that I love about doing these podcasts is that I get to reconnect with musicians/friends that I admire and respect as artists.

Life moves so swiftly and in so many directions, that we don’t always have an opportunity to talk to friends and love ones, let alone spend quality time with them. As I listen back to this recording in preparation for the upload, it stirs memories of a time reinforced by feelings of fulfillment and value creating, thereby validating why I became a musician in the first place.

This month, again, as with some of my past shows, is a wonderful reminder of the “touring musician” life style, travel while playing music, is so much fun and why I will live it for as long as I can.

Although he may not know this, Jay was one of the reasons that I look at life on the road with fond memories. I met Jay on my first major tour. He and I were on the Michael Franks tour back in 1993 – The Dragonfly Summer Tour. I’ll never forget how at the beginning it was not so easy to fit in, being the only woman with 12 guys.  Jay’s easy going, steady and sure manner, was what helped me begin to understand the workings of road life and come to love it as much as I do.

People use the word self effacing quite a bit when writing about an artist, so I’ll not use that word in my description here, instead I will use the word, unpretentious. There is nothing “hey everybody look at me” about Jay. The life reflective quality in how he communicates, that same quality is also present through out his playing. There is a lot of soul searching and when you hear his music, it pure soul talking. Always elegant, tasteful and honest to the core.

Grammy nominated guitarist/composer Jay Azzolina has been part of the New York Jazz scene for the past three decades.

As a leader Jay has recorded four CD’s of original compositions with some of the most influential players in Jazz including, Chris Potter, Adam Nussbaum, Larry Goldings, Gary Versace, John Patitucci, Tim Ries and Greg Hutchinson.

Jay continues to write and perform vigorously while maintaining a strong commitment to teaching and lecturing at Manhattanville College.